Author’s note: Coming to Korea posts are written with the newer expats in mind. If you have a more experienced perspective to offer, please share in the comments!

EDITED 9 April 2019 to add some more information. If you want an EPIC guide, check out our article of the best areas to stay in Seoul for all budgets!

As I’ve been making the transition to Thailand and the next chapter in life, some of the more basic questions began to crop up: where are some good neighborhoods to live? Which foods are worth trying? Where are the best places to get a drink? Sure, some of this can be done through the internet, but the best source of information remains the person on the street that knows the area. If I’ve missed a place where you’ve lived and would like to weigh in, comments are open – or just send an e-mail to chrisinsouthkorea AT gmail DOT com. 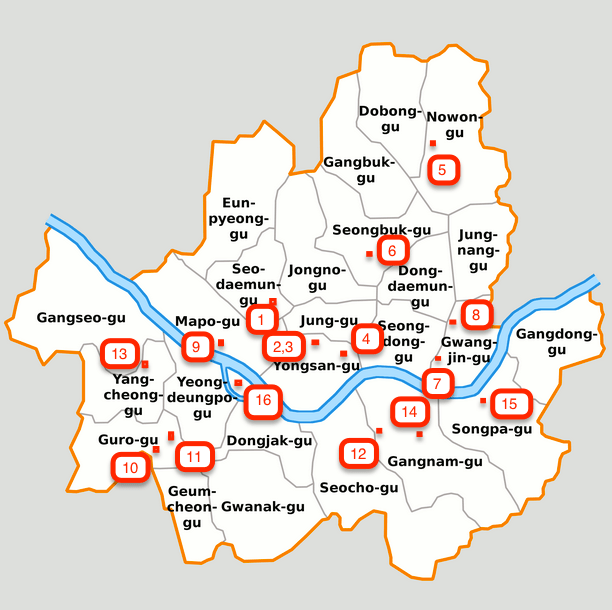 Photo credit: WikiMedia, with adaptions by me.

North of the river

3. Haebangchon – lots of expat-friendly restaurants, plenty of foreign sports shown at the bars. Apartments tend to be older, but a bit bigger, and key money is less. Haebangchon and Gyeongnidan are a short walk from each other, and both are a 10-15 minute walk to Itaewon.

4. Hannam-dong – serviced apartments, seemingly set up for the military crowd and the international businessmen / families needing a central, classy place. Expensive and not really for the ESL teacher, as far as I’ve seen.

5. Nowon – nice, residential area. You’ll likely be living in an officetel with fairly standard key money and rent. Some shopping is around the Nowon Station area, but getting home at the end of the night will require leaving the party early or taking an expensive taxi home. Sanggye, Banghak, and some other stations are pretty close to here as well.

6. Wangshimni – another older area, but more residential. You’re not far from Cheongnyangni station and some of the new development there, but for the most part the area hasn’t seen a lot of improvement recently.

7. Kondae / Konkuk University (with hat tips to Emma and Tim) – plenty of restaurants and a few foreigner-friendly bars in a Korean university area. Expect 5-10 million won for key money for something nice, but spacious options are around.

8. Gunja / Children’s Grand Park – an older area, but still plenty of change seems to be around. Konkuk University is a short bus ride away, as is the Dong Seoul (East Seoul) bus terminal, which is great for getting away)

9. Hapjeong-dong (with hat tip to Keith) – a good and underrated place to live. You’re near the river and close to Hongdae, but this area doesn’t have a whole lot of English speakers. Good bike paths and good links to public transportation as well.

South of the river

10. Guro (with hat tip to Alaric and Adeel) – older, more industrial area. Cheaper, older, but slightly larger apartments. While fairly close to Sindorim’s glitz, you may feel like one of the youngest people – and the only Westerner – in the area. There are lots of foreigners around, and as Adeel puts it, it’s in Garibong-dong where Internet cafes have keyboards that can type in Chinese.

11. Sindorim – very new and still developing, especially around Sindorim station and the huge, new mall. There’s a whole lot of old in this part of town as well.

12. Gangnam – this area’s expensive, whether you’re up near Yeoksam or closer to Gyodae / Kyodae (Seoul National University of Education). Officetels and other tiny apartments are sometimes rented with key money equal to one month’s rent. Larger apartments are around, but your employer better be ponying up the 10 million won key money. Look up the hill along Gangnamdae-ro for some places closer to the action.

13. Mok-dong – Lots of hagwon and families nearby the neighborhood housing one of Seoul’s immigration offices.

14. Daechi – one-room apartments are expensive, and most likely paid by your employer (if not, live elsewhere and commute). Another expensive area to live in, and teaching rich people’s kids isn’t all it’s cracked up to be.

15. Jamsil – officetels and high rises all around – feels like more of a business area than a place where people live.

16. Yeouido / Yeouinaru (with hat tip to Sam) – Korea’s Wall Street. The island has a park that gets flooded with visitors during the cherry blossom season, especially around the National Assembly area. Expect to see lots of professionals, both young and old, and It’s dead on the weekends, and the apartments tend to be very old or very new.

The Korean: “My only addition would be that in Gwanak-gu, near SNU, there are a lot of pleasant little rooms for college students as well.”

Lissette Machin: “I am in the SNU area and lots of cafes, restaurants, and easy access for home shopping.”

Now that you’re familiar with Seoul, go check out more than 40 of the best places in Seoul to eat and see over at Make Time To See The World. Gyeonggi-do – the satellite towns and so on

This is one area to be careful with. A recruiter with fewer scruples may try passing off an area as being ‘close to Seoul’ or ‘on Seoul’s subway system’. The former can be true as ‘close’ is never defined, and the latter is scary as the subway extends into three different provinces. One can be on Seoul’s subway system or ‘within walking distance of the subway’ and still be two hours from downtown. If you’re told a job or apartment is ‘near the subway system’ without being given an exact name, pointedly ask for it, and how many meters away it is.

1. Ansan – quite a few non-western foreigners around. It’s on the southern part of line 4 of Seoul’s subway system, and the Suin line connects you to Incheon a lot easier. I’ve heard that the food scene is picking up, but that it’s otherwise a fairly sleepy little town.

2. Dongtan – I lived here for a little over a year. Everything’s brand-spanking-new, though it feels artificial and lacking any natural growth (beyond what pops up from the unbuilt areas). Lots of greenspace and expensive officetels. M-Buses and the red buses make plenty of connections to Seoul, but getting around Dongtan itself is trying, since the city still has a carbon-copy feel to it.

3. Suwon – an older area, fairly well connected to Seoul. Apartments seem to be a bit bigger and more varied, though the newer construction is smaller as usual.

4. Cheonan – about as far away as you can get from Seoul and still be considered part of the Seoul metropolitan area. You’re about as far south as Seoul’s subway system can take you – it’s not shown on the map since it’s in the next province south. It’s a nice enough suburb, with the small town life you’d expect 1 1/2 hours away from the big city. Day trips to Seoul are easy enough, but staying for the nightlife means you’ll either be crashing at a friend’s house or a hotel. Asan is somewhat close, and is more of the same.

5. Uijeongbu – up north now, the military-infused legacy of the town is hard to miss. While you’re better connected with the city and Seoul thanks in part to the U line, there’s really not a whole lot going on outside of the bar scene.

6. Bucheon – going west and towards Incheon’s airport, Bucheon has two subway lines running through town, but not a lot of foreigners. A nice bit of green space is around, but you’ll want to learn your Korean pretty quick in order to get around the buses and such.

7. Yeoju – not fairly considered part of the Seoul Metropolitan area, and for good reason – the first subway line to the area won’t be completed until 2015, and currently requires a decent bus ride to make it into Seoul. Geographically speaking, you’re closer to Gangwon-do than any action in the big city. There are some tourist attractions around, but traveling to Seoul will require some time and willingness to stay for the weekend to make it feel worth your while. You might enjoy the outlet shopping, but watch out for the ajummas.

8. Paju – pretty far north, and a nice place to get away from the urban atmosphere. Life here seems to move that much slower, but rumblings from the north may make you think twice.

I’ll note that Incheon, while part of the Seoul’s Metropolitan Area in some ways, is big enough and independent enough to be considered it’s own city. Getting in and out seems easy enough, though the buses will only feature the Korean language in most cases. Being close to the airport is great, though, and makes getting out of Korea that much faster.

Now how did I forget about Bundang? A perfectly nice place to live, connected to Seoul via two subway lines, and large enough to be considered an independent city with everything around. It’s more modern than most other places in Korea (one exception being Dongtan). There’s not as much around for the tourists in this southeastern corner,

Ilsan, in Goyang just north of Seoul, was the first major push to create a planned residential city as a Seoul suburb. It’s fine for living, but beginning to get that dated look – especially when compared with Bundang or Dongtan. It’s connected to Seoul via line 3, and there are enough buses around to get around (just be prepared to read Korean).

PS – if you are new to Seoul, it’s a great idea to stay in a hostel for a few days to get your bearings (and meet awesome like-minded people!). Check out our epic list of the best hostels in Seoul.

Readers, where in Korea do you live? Do you like it? Share your thoughts in the comments!